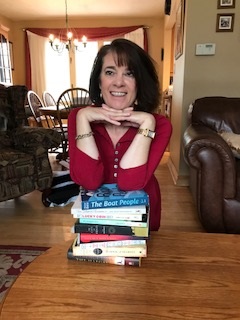 Sarcoma. Very rare. Chronic. Incurable. Stage 4. I think every single one of those words is enough to strike fear in your heart, but in combination, it is enough to change your life. It certainly did mine.

It was November 1st, 2017. I had had a dry cough. Nothing horrible, but it persisted for a couple of years.  My first visit to a respirologist had me diagnosed with Idiosyncratic Pulmonary Fibrosis. Also a chronic, deadly disease. However, the first CT scan proved that diagnosis unlikely, but did discover “nodes” on my lungs.  Next possibility was sarcoidosis, another chronic lung condition.  However, my family doctor told me that it was not very likely as it was quite rare, about one in 11,000.  A fine needle biopsy missed the biggest node, so finally I was wheeled into the OR on Oct 24th for a wedge biopsy.  In the meantime a PET scan showed nothing unusual and the surgeon told me after the surgery that what she took out didn’t look like cancer. So, when I got the pathology report on Nov 1st that told me it was cancer, a very rare sarcoma in fact, I was totally unprepared.  Even less so for the numbers. My sarcoma is approximately 1 in a million. With those odds, I could have won a lottery.

I was alone at the time. The doctor’s office hadn’t warned me to bring someone.  I don’t remember getting to my car.  Shock and numbness. That’s all I remember.

I was referred to a sarcoma oncologist at Princess Margaret Hospital and an appointment was made for mid-November.  At that point I was hopeful.  Surely there was some sort of treatment plan.   A specialist at Canada’s premier cancer hospital must know something.  The sad truth is that rare sarcomas are underfunded, under-researched and even the experts don’t have the knowledge that exists in other more common or “popular” cancers.  Soft tissue sarcomas are the quiet kids, left to themselves in the corner of the classroom.

My particular form of sarcoma is called Epithelioid Hemangioendothelioma or EHE for short.  It has been made famous by Kris Carr in her documentary “Crazy, Sexy Cancer.”  A medical publication from February 2018 puts my life expectancy at 6 months to 30 years.  You could take those numbers to be hopeful, or as an indication of how little the medical community knows.  In my case, I take it to mean both.  Initially I was put on the most common “treatment” plan for EHE.  It is called “watch and wait,” in other words nothing at all. Just live.

This sarcoma was first named EHE and characterized in the early 1980’s by Sharon Weiss and Franz Enzinger (although it had been described by others under various names in the preceding decade).  There are active foundations in America, the U.K. and Australia.  In the last 5 years there has been specific EHE research in those countries with world leaders in sarcoma.  In Canada, there has been little or nothing.

I am a secondary teacher librarian.  Research and communication are basically what I do everyday.  Social justice is another lifelong passion of mine.  Now I am turning my skills and passion in a different direction.  It is simply unacceptable to me that Canada is not at the table with the UK, US and Australia.  We need to start research here, and get a seat where the discoveries and decisions are being made.  Having a rare cancer doesn’t mean I shouldn’t have access to money or research, and simply be sentenced to sit quietly in the corner to die.  I am not a quiet kid, and NONE of us should be treated that way.

It is now over three years since I first wrote those words.  This November 2022 will be my 5 year cancer-diagnosis-aversary.  I have undergone 2 more surgeries, a round of chemo and tired a couple of oral drug therapies with no significant improvements, although no significant disease progression either.  I am still here and I am still breathing.

I have worked hard doing fundraising and awareness and now sit on the board of the Sarcoma Cancer Foundation of Canada. Just this week we (SCFC) announced a one-million-dollar research project for EHE here in Canada.

I just hope that someday other Canadians who have been diagnosed with EHE will have options for treatment and even a cure here in Canada.  I hope that I get to live to see that too.

Like every other mother, I want to see my children grow up, graduate, marry and even perhaps become parents themselves. I would love to travel.  My hopes for the future are common, not exceptional in any way, except due to my diagnosis of EHE I can no longer assume they will happen. And as the lead patient advocate here in Canada I have watched and listened as fellow EHE patients have died.  Something that weighs on me everyday.

Please support this new project if you are able.  It would mean so much to a small group of Canadians with EHE who want to #JustLive.

Fiona Ross is a member of the SCFC board. She is the lead patient advocate for EHE in Canada.  She is a former high school teacher/librarian and proud Mum of three kids (24,21,14) plus two dogs.